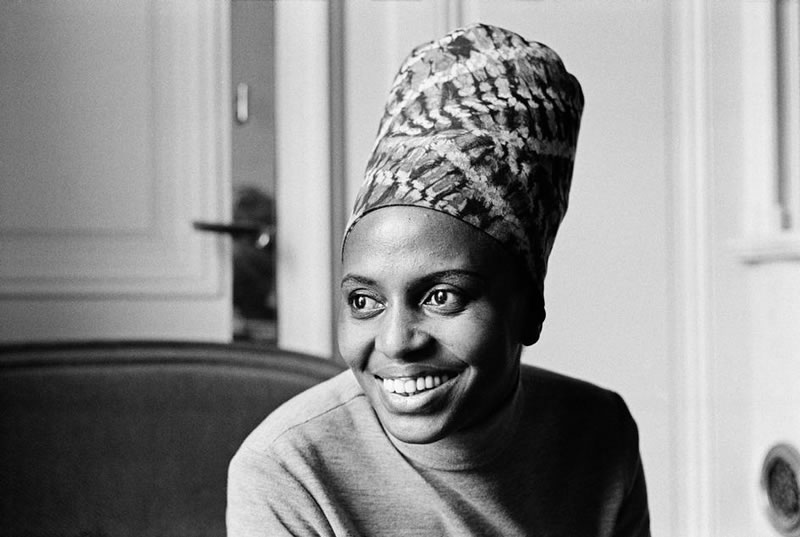 South Africa, Africa and the world over, hereby acknowledge and recognize the 14th year Commemoration of the passing of Humanitarian and Musical Icon Mama Miriam Makeba; in Honor and Remembrance of the late Her Excellency Goodwill Ambassador Dr. Miriam Makeba.

Today, Wednesday, November 9, 2022, signifies the 14th year commemoration of the passing of one of the most iconic Africans the world has ever witnessed; the Legendary Songstress, Humanitarian and Goodwill Ambassador, Dr. Miriam Makeba.

As we reminiscence on the memory and contributions of “Mama Africa”, we seek to achieve, and reach out to All who loved her, from all over the world to emulate what came so easily to the legendary late Dr. Miriam Makeba. Specifically, that is to reach out to one another, and remember that the way she lived her life was a testament as to how we should all live our lives; by treating each other with respect and the love that resides so deep in all our hearts, and be kind to one another, as well as being kind to ourselves, and make this world a better place. “We love you always Mama Africa, Rest in Peace – Lala Ngoxolo”; says the Miriam Makeba Foundation.

This year, in tribute to and memory of the legendary songstress and humanitarian, United Kingdom, London based musical duo/group named lavender have dedicated their brand-new single/song entitled “First Bagel Of The Night” Featuring Miriam Makeba.

The Commemorative Day not only pays tribute to one of the world’s most iconic Africans, but also to her immense contribution as a humanitarian and Goodwill Ambassador.

UK musical duo/group lavender on their new single/song “First Bagel Of The Night” have developed a signature sound based on Trip-Hop, Soul, Trap, music, Hip Hop, Jazz and Lounge; and, on single “First Bagel Of The Night” a Miriam Makeba vocal sample is from a song entitled “A Promise” by Miriam Makeba; written and composed by legendary South African songwriter, arranger & producer Caiphus Semenya.

Lavender – Listening link to single and EP for all major platforms listen to it here!!

UK rapper and producer, Ntantu has developed a signature sound based on Afropop, RnB, Dancehall and Rap and, on single “Far Away”, the Miriam Makeba vocal sample is from a song entitled “BaxabeneOxamu” originally titled “Oxgam”. The particular recording of “BaxabeneOxamu”, was from a Swedish televised interview in 1965 in which Miriam Makeba performed live. This was written by another legendary South African artist, Letta Mbulu.

The “Far Away” single by Ntantu featuring Miriam Makeba is now out on all major streaming and digital platforms.

Please see links below for the music video and listening links: 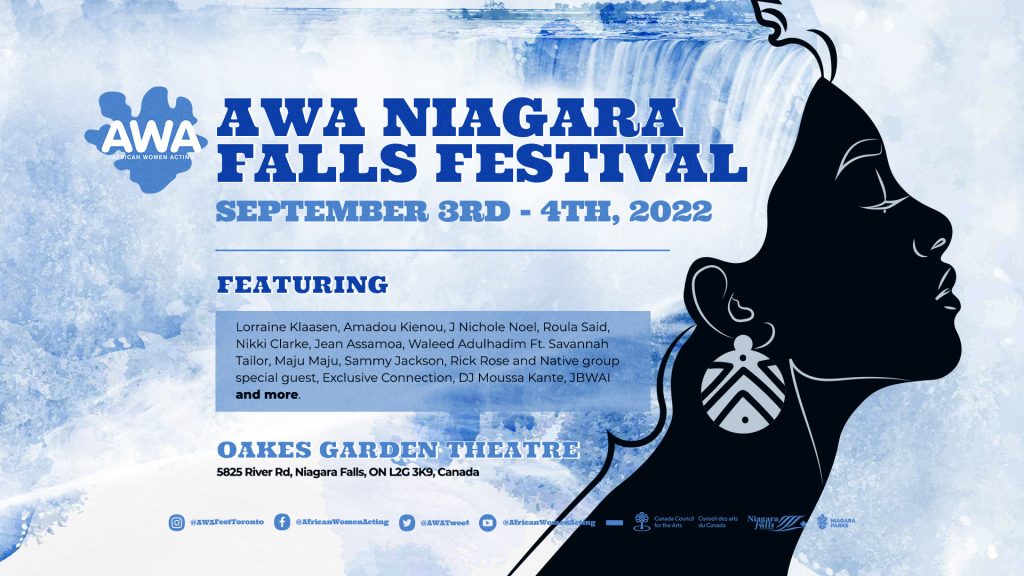 The African Women Acting organization is set to celebrate the best of African music, crafts, vendors, and more with the return of their annual AWA Niagara Falls Festival this September 3rd & 4th.

The two-day Festival features an action-packed schedule of highly-curated and award-winning music, dance, and spoken word artists alongside incredible arts and crafts exhibitions, interactive workshops, storytelling, and delicious authentic African, Caribbean, and Canadian food vendors — all under one sky at the beautiful Oakes Garden Theatre. 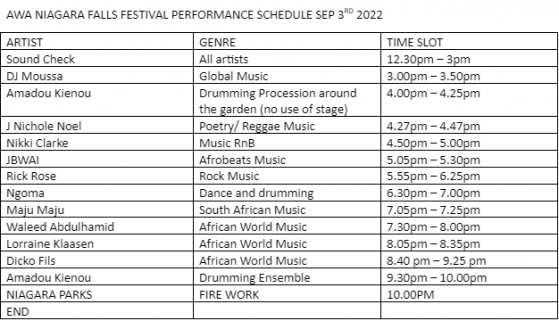 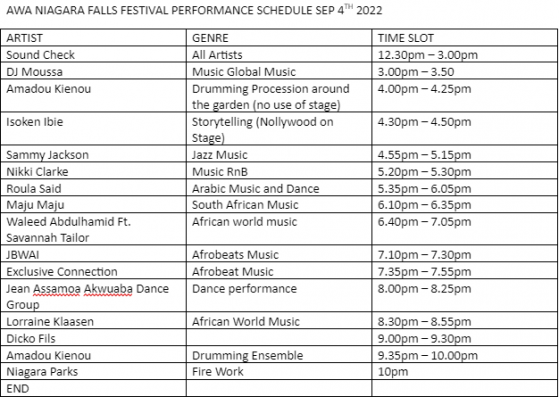 We acknowledge the support of the Canadian Race Relations Foundation with funding provided by the Government of Canada. 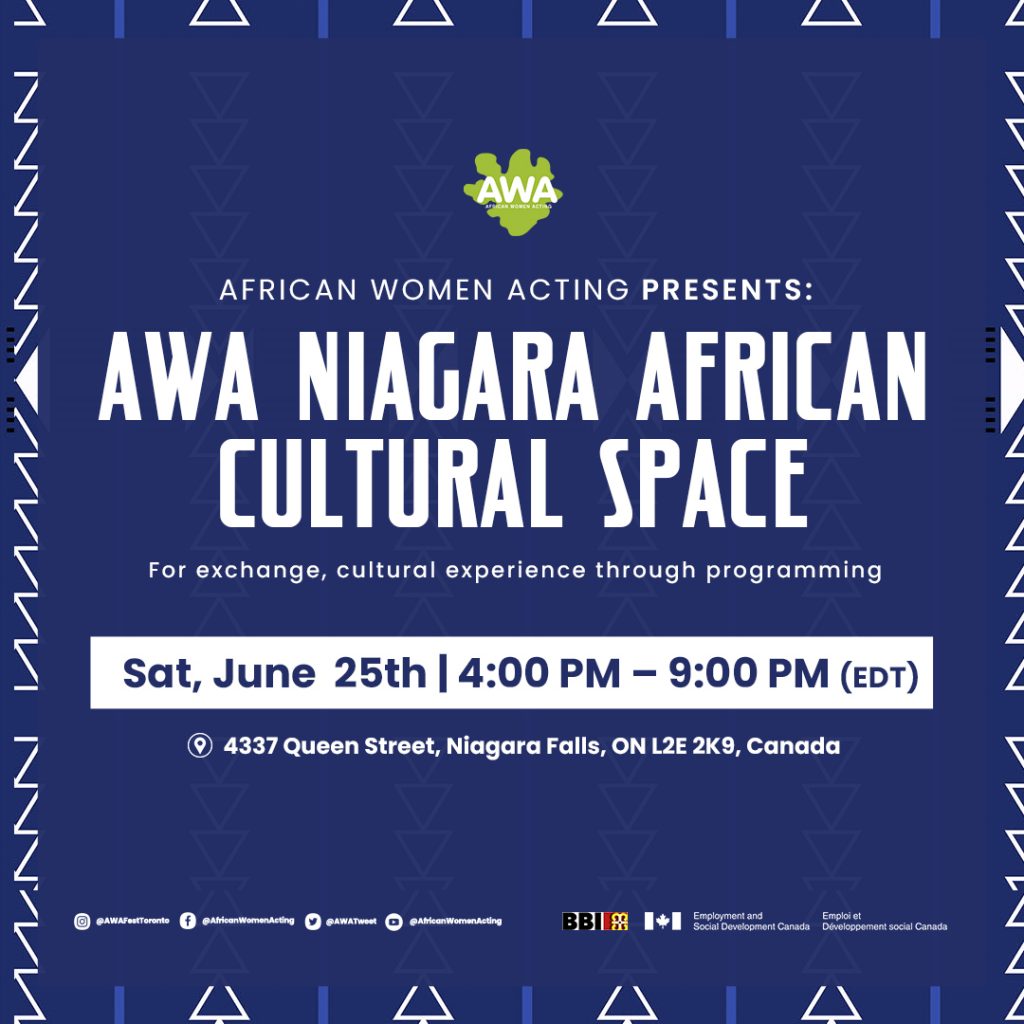 Niagara Falls, ON (June 25, 2022) – The grand opening/fundraiser of AWA new branch location in Downtown Niagara Falls the “AWA Niagara African Cultural Space” 4337 Queen Street Niagara Falls on Saturday June 25, 2022, 4pm – 9pm. This will be our very first opening in Niagara Falls as we are primarily located in Toronto. The AWANACS was conceived by visionaries leading AWA among whom are skilled, hard-working African women, who have demonstrated tremendous effort in pursuing their artistic visions, careers, and social/political/economical activism in the sector. The Space will encourage learning about the rich African cultural heritage, coach, workshop, and present talents through all year-round programming for the community and artists with inclusiveness of other counterparts. Further, the space will also serve for community rentals for private events, smart office and gatherings that are inline with AWA’s vision.

The launching offers a day action-packed schedule including special guest speakers among dignitaries, local politicians, community leaders, artists, and the public. The event by RSVP only, is enriched by well curated arts exhibition, exciting crafts and products for silent auction, raffle draw, entertainment by new and professional artists and delicious authentic African food and AWA brand of African cookies.

Join us in the opening celebration of AWA Niagara African Cultural Space and join us as we raise money to support our activities!

Tickets can be purchased at https://www.eventbrite.ca/e/launchingfundraising-awa-niagara-african-cultural-space-tickets-349932175557

ABOUT US: AWA is a pan-African not-for-profit organization geared towards promoting women’s issues, empowering, mentoring, coaching, presenting, and promoting upcoming and mid-career women artists of African heritage. AWA also intend to increase the public understanding and appreciation of African traditional and contemporary arts through artistic production i.e., music, theatre, spoken word, digital media art, visual-arts, movie screening and the AWA Festival. Our priority as AWA is focused on women but we as well collaborate with other gender and ethnic group’s counterparts.

A special thank you to Black Business Initiative BBI and @ESDC_GC for the support with our strategic and business plan.

Join us in the opening celebration of AWA Niagara African Cultural Space and support us as we raise money to sustain our activities! 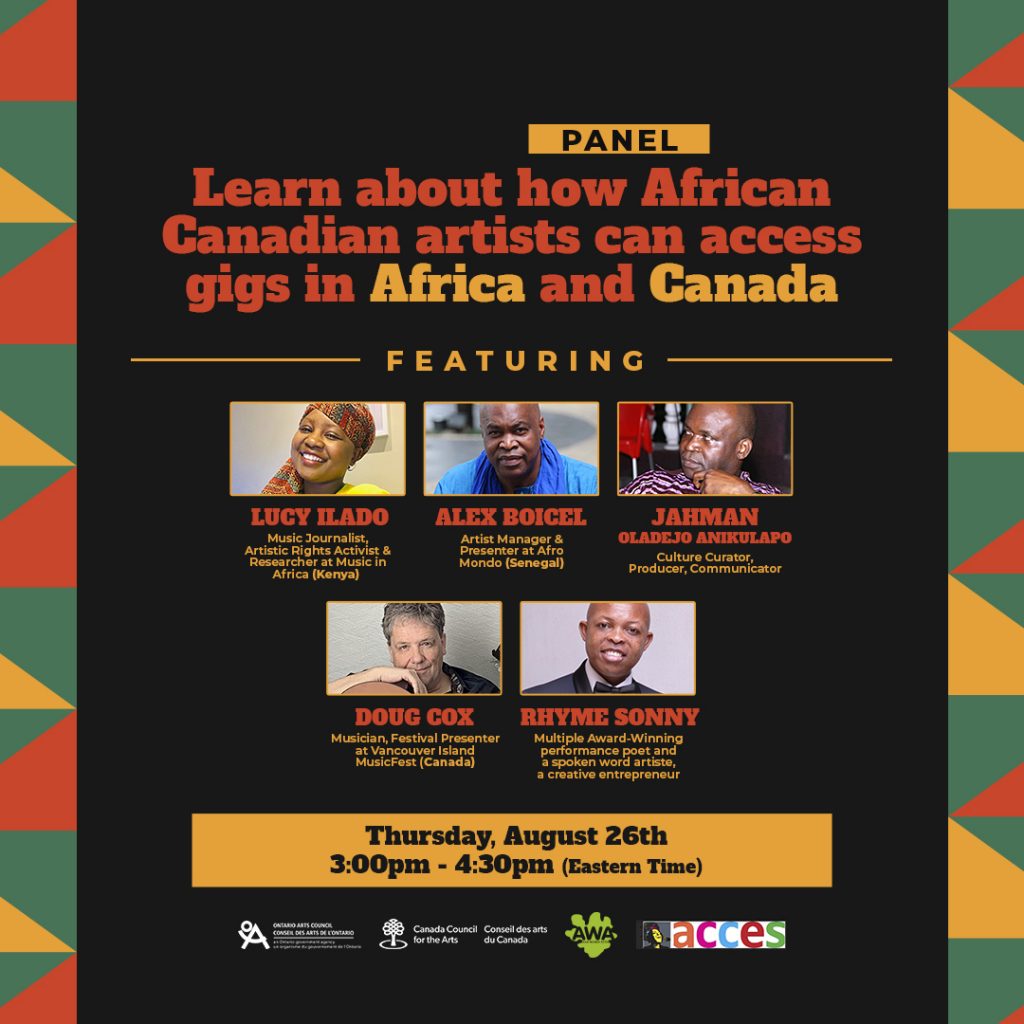 The Panel discussion African Music and Poetry/Storytelling Export “Learn about how African Canadian artists can access gigs in Africa and Canada” is made accessible to artists, arts organizations, and stakeholders in the sector for #FREE on Thursday August 26th at 3pm – 4.30 p.m. Eastern Time.

The panel was created in response to overriding obstacles in the export of music by African musicians and singers in Canada.

There will be entertainment by Amai Kuda, Lamoi and Sonia Aimy which will be screened during the panel for a maximum 10 minutes each for music and 5 minutes for poetry.